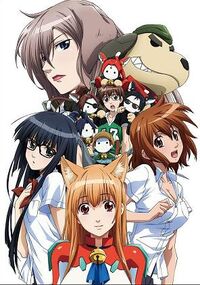 Cat Planet (あそびにいくヨ!) Cuties is a Japanese light novel series by Okina Kamino. An anime adaptation premiered on July 10, 2010 under the English title, Asobi ni Ikuyo: Bombshells from the Sky. FUNimation Entertainment has licensed the series under the title Cat Planet Cuties and plans to release it on home media in 2012.

Cat Planet Cuties revolves around the teenage boy Kio and his friendship with a Catian girl, Eris, who tells him that she is an alien when she appears in front of him during a memorial service for a relative. Kio finds himself having to protect Eris from government workers, alien worshippers, and even his childhood friend who is looking to be part of the CIA.

Community content is available under CC-BY-SA unless otherwise noted.
Advertisement